You are here: Home / Archives for CREW

Almost a decade ago, Andalas’s birth at the Cincinnati Zoo was cause for much celebration. It offered hope that individuals in captivity could help to replenish the numbers of this critically endangered species. Since then, Andalas has gone from strength to strength. In 2007, it was time at last to return to Sumatra to do what comes naturally. After an arduous journey, Andalas was home in his native habitat. This photo gallery and video captures moments from his journey over the past ten years.

As part of the Sumatran Rhino Sanctuary’s captive breeding program, Andalas (the 7-year-old male Sumatran rhino born at the Cincinnati Zoo and transferred to Indonesia in 2007) is being exposed to as many of the sanctuary’s female rhinos as possible so he learns to communicate with the females long before they are put together for breeding purposes. This socialization process is being facilitated by feeding the rhinos their daily diets through the fence at the central breeding area, and then opening the gate so the rhinos can interact with each other if they choose. Over the past several months, Andalas has routinely been introduced to all three of the Sanctuarys females: Bina, Ratu and Rosa. This video shows an introduction between Andalas and Ratu – chasing and fighting are actually part of normal rhino “courting rituals.” Soon after this video was shot, Andalas mated with Ratu for the first time.

Video from the International Rhino Foundation.

The Center for Conservation and Research of Endangered Wildife (CREW) which is based at the Cincinnati Zoo and Botanical Gardens is playing a central role in the mission to prevent the extinction of the Sumatran rhino.

Through their research, CREW scientists have become world experts on the reproductive physiology of Sumatran rhinos. In an effort to increase animal numbers and improve genetic diversity, CREW uses science and technology to achieve numerous reproductive breakthroughs in these highly endangered Asian rhinos.

The Sumatran rhinoceros is one of the most endangered animals on earth with fewer than 270 individuals distributed throughout fragmented rainforests of South East Asia. A captive breeding program was formally established for this species in 1984, but efforts to propagate these rhinos in captivity failed.

In 1997, CREW scientists initiated research using endocrinology and ultrasonography to learn about the reproductive physiology of the species. As a result, scientific breakthroughs led to the first Sumatran rhino calf bred and born in captivity in 112 years at the Cincinnati Zoo on Sept. 13, 2001.

Since the birth of that first calf, two additional calves have been produced. This series of successful births clearly demonstrates how productive a captive breeding program can be when it incorporates good science, veterinary care, animal husbandry and intensive management. The Cincinnati Zoo remains the only place in the world breeding this species successfully in captivity.

The return of a now adult Andalas to Sumatra in November 2007 was a significant and emotional milestone for the CREW team. It was the fruition of years of dedicated struggle marked as much by frustration and disappointment as by success and mini-miracles.

When Dr. Terri Roth, the Director of CREW visited the Cincinnati Zoo’s first-born Sumatran rhino calf, Andalas, in his new home at the Sumatran Rhino Sanctuary (SRS) on Sumatra, she was delighted to find a rhino that is thriving in his tropical homeland. Weighing in at 770 kg, Andalas is now the largest rhino at the reserve and is bigger than his father Ipuh (at the Cincinnati Zoo). Andalas’s neck has thickened, and his interest in the female rhinos has become apparent, suggesting he may soon be breeding.

Despite all of these changes, Andalas has maintained his childhood love of people and the attention they give him. He is the most well behaved rhino in the reserve for blood collection, foot exams, ultrasound exams and many other hands-on procedures that help the staff maintain his excellent health. Andalas has never been sick or seriously injured and he has adapted to the new forest environment, the change in diet and exposure to many new insects that he hadn’t encountered in the US, without a hitch. We can be reassured that Andalas is clearly benefiting from the outstanding care and wonderful home the Sumatran Rhino Sanctuary provides and await exciting news of successful matings and future offspring!

See how Andalas is adapting to his new home and caregivers in this video footage! 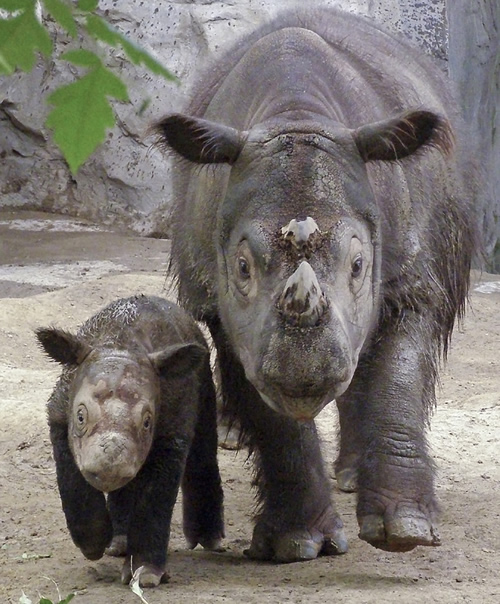 CINCINNATI, OH (September 6, 2009) – “Emi”, the world’s most famous endangered Sumatran rhino, passed away yesterday morning at the age of 21 at her home at the Cincinnati Zoo & Botanical Garden. The female Sumatran rhino lived at the Cincinnati Zoo for the past 14 years and produced three calves, Andalas (2001), Suci (2004) and Harapan (2007). In 2001, years of breakthrough research by scientists at the Zoo’s Lindner Center for Conservation and Research of Endangered Wildlife (CREW) resulted in the first captive birth of a Sumatran rhino since the 19th century.

“No animal has been more beloved than Emi in the 134 year history of the Cincinnati Zoo,” said Thane Maynard, Director of the Cincinnati Zoo & Botanical Garden. “She is the most famous rhino in the world and has led the way in the effort to establish a successful captive breeding program for this critically endangered animal. My fondest hope is that we now build on Emi’s legacy and increase our efforts tenfold to continue the global effort to save the Sumatran rhino.”

In March, the Zoo’s Animal Care Staff first noticed that Emi’s appetite was inconsistent; she had less energy and had lost some weight. Concerned Zoo Veterinarians performed a complete physical exam with blood work in early April. Her examination was unremarkable, but blood work indicated some subtle changes in her liver function. Veterinary staff continued to conduct a battery of diagnostic tests and consulted with numerous rhino experts worldwide in an attempt to determine a cause for her clinical signs. In May, Emi’s attitude improved, her appetite picked up, and she gained some weight back. However, overall, her appetite and attitude had been inconsistent and despite various treatments administered, her condition continued to deteriorate. On the day of her death a thorough post mortem exam was performed. Tissue samples will be submitted to a veterinary pathologist to help determine a cause of death.

“It is always devastating when an animal reaches the end of its life, especially those that are so special, but Emi could not have been in better hands all these years,” said Dr. Terri Roth, Director of the Cincinnati Zoo’s CREW. Our Veterinary staff has been working tirelessly for months to identify the source of Emi’s illness, and our keeper staff has done everything possible to support Emi on a daily basis during our struggle to save this rhino.”

A decade ago, little was known about caring for the critically endangered Sumatran rhinos in captivity, let alone their mating habits and reproductive cycles. But Cincinnati Zoo staff, led by Dr. Terri Roth, have relied on the use of ultrasound, close monitoring of hormone levels and years of patient observation and trial-and-error to learn how to successfully breed the Sumatran rhinos.

Emi’s first calf, Andalas, was the first Sumatran rhino bred and born in captivity in 112 years.

Repeating that success with the birth of a second calf, Suci, in 2004, was absolutely essential to validate the scientific methods developed at the Cincinnati Zoo and for the continued progress of the captive breeding program. In 2007, Emi gave birth to an unprecedented third calf, Harapan, again raising hopes among conservationists that the captive breeding could play an important role in the species’ recovery.

Andalas, now almost 8 years of age, was transported to the Way Kambas Sumatran Rhino Sanctuary in Indonesia in 2007 to take part in an international breeding program. The Sanctuary has been in close consultation with the Cincinnati Zoo. The methodology that has proven successful at the Cincinnati Zoo is being adapted to the conditions at the Sanctuary. With the arrival of Andalas, the options for reproduction have increased dramatically and the Sanctuary is poised for success. Rhino experts are hopeful that he will successfully breed with the females at the Sanctuary to achieve pregnancies and offspring.

The Cincinnati Zoo is the only place in the world to successfully breed this critically endangered species in captivity. Two out of the three Sumatran rhinos living in the United States, five-year-old Suci and her father, Ipuh, reside at the Cincinnati Zoo. Harapan moved to the White Oak Conservation Center in Yulee, Florida in 2008. Emi and Ipuh were both sent to the U.S. by the Indonesian government as part of a cooperative agreement developed between Indonesia and four U.S. zoos (Cincinnati, Bronx, Los Angeles and San Diego).

Considered the most endangered of all rhino species and perhaps the most endangered mammal species on earth, it is estimated that at least 60 percent of the Sumatran rhino population has been lost in the last two decades. The primary cause is conversion of rhino habitat for agriculture, even in some national parks, and poaching for its horn which some Asian cultures believe contains medicinal properties. Today, there are only nine Sumatran rhinos living in captivity worldwide and fewer than 200 animals exist in isolated pockets of Sabah, Malaysia and the island of Sumatra in Indonesia. Sumatran rhinos can live 35-40 years.

The Cincinnati Zoo is working closely with the Indonesian Ministry of Forestry, the Indonesian Rhino Foundation, the IUCN Asian Rhino Specialist Group and the International Rhino Foundation, to protect this species in the wild, and also propagate Sumatran rhinos in captivity. Both approaches will be necessary to secure the future of this critically endangered species for future generations.

In Loving Memory of Emi: A dedication to Emi written by Dr Terri Roth of the Cincinnati Zoo