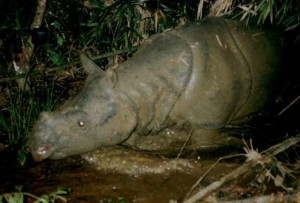 The recent news of the extinction of the Javan rhinoceros on mainland Asia, with the death by poaching of the last remaining female in Vietnam in 2010, prompts us to draw attention to two implications for Malaysia. Firstly, this same kind of rhino went extinct in Malaysia in the 1930s. Thus, what seems at first to be only a local loss from Peninsular Malaysia has transformed into a global extinction of a unique population of Javan rhinoceros. It is now up to Indonesia to save the last remaining population of the species, on the island of Java. Secondly, there is another species of Asian rhinoceros of concern nearer to home. This is also an extremely endangered species, commonly known as the Sumatran rhinoceros, previously widespread in Asia but now confirmed to occur only in Indonesia and Malaysia.

Despite dedicated efforts to protect this species from poaching over the past few decades, within protected areas in Sumatra, Peninsular Malaysia and Sabah, numbers have continued to decline. Most specialists close to the situation now believe that habitat loss and poaching no longer represent the major threats to the survival of this rhino. Instead, numbers are so very low that factors associated with low numbers, including inability to find a fertile mate, pathology of the reproductive organs in females resulting in no pregnancies, inbreeding and skewed sex ratio, mean that for many years, rhino death rate has been exceeding birth rate. If this is so, then protection of the remaining wild rhinos and their habitat are necessary but insufficient measures to prevent the species extinction.

In a paper titled “Now or never: what will it take to save the Sumatran rhinoceros Dicerorhinus sumatrensis from extinction?” published in the international conservation journal Oryx earlier in 2011, Ahmad Zafir and his colleagues in WWF-Malaysia, Sabah Wildlife Department and Yayasan Badak Indonesia, wrote the following: “Recent data from governments, NGOs and researchers indicate that the global Sumatran rhino population could be as low as 216, a decline from about 320 estimated in 1995. Based on lessons learnt and expert opinions we call on decision makers involved in Sumatran rhino conservation to focus on a two-pronged approach for conservation of the species: (1) the translocation of wild rhinos from existing small, isolated or threatened forest patches into semi-in situ captive breeding programmes, and (2) a concomitant enhancement of protection and monitoring capacities in priority areas that have established these breeding facilities or have recorded relatively high population estimates and track encounter rates. At least USD 1.2 million is required to implement this two-pronged strategy annually in four priority areas: Bukit Barisan Selatan and Way Kambas National Parks on Sumatra, and Danum Valley Conservation Area and Tabin Wildlife Reserve on Sabah.” The Borneo Rhino Sanctuary programme is already underway in Sabah, based on those two approaches, and implemented by Sabah Wildlife Department with assistance from other agencies including Institute for Zoo and Wildlife Research (Berlin), Yayasan Sime Darby, WWF-Malaysia and Borneo Rhino Alliance, a recently established Malaysian NGO dedicated to saving the rhinos in Sabah. A similar programme has been underway in Indonesia for more than a decade.

The extinction of the Vietnam rhino suggests that leaving rhinos in the wild to be poached or die of old age is no longer an adequate approach. Instead, the Indonesian and Malaysian approach for the Sumatran rhinoceros is most likely now the only way forward to prevent the extinction of this species. Why bother to save the species? The argument is ethical, not economic. Fossils show that something very similar to this form of rhino has existed for about 20 million years, and we may be only a decade or two away from its extinction if no active interventions are made. Now that we know the situation, we ought to try to prevent extinction before that opportunity is lost. Is it worth the money? Ahmad Zafir and colleagues put that question in context, noting in their paper that the annual cost of running the ongoing programmes in Sumatra and Sabah is equivalent to the amount paid at an auction in USA in 2010 for a 1939 edition of a Batman comic book.

We surely do not want Malaysia to have to announce in a couple of decades from now news similar to that from Vietnam last month. Let’s recognise that efforts to promote the survival of the Sumatran rhinoceros ought to be made a national conservation priority.

This joint statement is signed off by the following organisations: