You are here: Home / Rhinos at Risk / FAQs 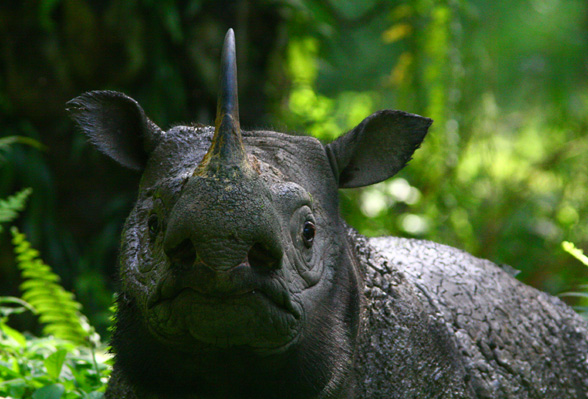 What rhinos occur in the South-east Asian region?

There are two species : Javan rhinoceros (scientific name Rhinoceros sondaicus) with one horn, which occurred in Borneo in prehistoric times and survived in Sumatra until the nineteenth century and in Peninsular Malaysia until the twentieth century. Now, the species occurs only in Ujung Kulon National Park on Java island (Indonesia), and Cat Tien National Park in Vietnam.

The other species is known either as the Asian Two-horned rhinoceros or, more commonly, as the Sumatran rhinoceros (Dicerorhinus sumatrensis), although the latter name is misleading because the species once occurred throughout much of Southeast Asia. Now, this species occurs only on Sumatra and Borneo islands, with a few, possibly non-viable individuals in Peninsular Malaysia.

Are rhinos on Sumatra and Borneo the same species?

Sabah is one of thirteen States in the federation of Malaysia, and is situated on the northern 10% of the equatorial island of Borneo. Sarawak is also a Bornean State within Malaysia, while the rest of Malaysia, known as Peninsular Malaysia, is at the South-eastern tip of mainland Asia.

What is the current situation for rhinos in Sabah?

There are two, very small breeding populations, in Tabin Wildlife Reserve and in and around Danum Valley Conservation Area. In addition, surviving in a few scattered locations in eastern and central Sabah, there are a very few remnant rhinos, which are not viable long-term due to their very small numbers and limited remaining forest habitat. That means that there are probably fewer than 40 rhinos in Sabah, but only a small percentage are breeding females living within potentially viable populations.
Without specific new actions, the prospects do not look good. Normally, when a species gets to such low numbers, with so few breeding females in viable sites, the most likely outcome would be extinction. Extinction may result not only from random deaths from sickness or poaching, but also as a result of inadequate breeding rate (not enough individuals exist to meet and mate), and potentially from the adverse health effects of inbreeding (breeding amongst close relatives).
Despite various conservation measures taken to conserve Sabah’s rhinos since the 1980s, by government and NGOs alike, rhino numbers have continued to decline overall, and have seemingly stagnated in both Tabin and Danum. A July 2007 expert workshop in Kota Kinabalu, Sabah, led by SOS Rhino and Sabah Wildlife Department, resulted in a consensus that active steps are now needed to concentrate remaining rhinos at a specific site, in order to boost prospects for successful breeding.

Is this the best option to save Sabah’s rhinos?

Since 1980, the time and funds of many institutions, both governmental and NGO, has gone into efforts to breed Sabah’s rhinos in captivity. The only success to come from those efforts has been to gain knowledge, but in the mean time, rhino numbers have declined. Since the option to give up on Sabah’s rhinos, and let fate decide the species future has been rejected, the consensus view of governmental and independent experts is that remaining wild rhinos in Tabin and Danum Valley should continue to be protected in their natural habitats.

What is certain is that the isolated remnant rhinos in Sabah will drift to extinction if left in place. This will happen because there are too few rhinos in any one location, and these habitats are too small to support breeding populations. Hopes for survival of rhinos in Tabin and Danum are literally that: hopes. The species might or might not survive in one or both places, long-term. However, by doing nothing, the fate of the Borneo rhino is left entirely to chance. As an NGO focused on saving the Bornean rhinoceros, BORA can assist government, and corporations whose activities have impinged on natural forests, to try to save the species.

A rhino was caught in Sabah in August 2008. What is the story?

A rhino “captured” on video was subsequently captured in real life, having walked out of the forest into an oil palm plantation, from which it refused to return to the forest. This rhino, a mature male named Kretam, or Tam for short, was enticed into a crate and moved into a small paddock in Tabin Wildlife Reserve on 13 August 2008. His tameness indicated that this rhino was experiencing a problem. Specifically, it was decided to capture Tam because he had a visible injury to the right front leg, which turned out to be from a snare trap. This injury was treated successfully after capture.

On the advice of veterinarians who work at the Sumatran Rhino Sanctuary at Way Kambas, Sumatra, Indonesia, a 2.5 hectare extension to the paddock was built, encompassing forest and a small seasonal stream. The cost of building the new paddock was borne jointly by Sabah Forestry Department, WWF and Ministry of Tourism, Culture and Environment. This site is now the “transit area” for Tam and for additional rhinos that may be caught in the future.

How will rhino conservation in Sabah be financed?

The dedicated rhino protection teams are run by NGOs (BORA and WWF) who work in collaboration with Sabah Wildlife Department. Funding for rhino conservation has mainly come from two major funding sources – the Sabah government and Yayasan Sime Darby. BORAʼs principal funding ended in June 2015 and the organization is in urgent need of funds to continue its efforts. Find our how you can help here.