The 4 July 2018 announcement by Professor Thomas Hildebrandt of Leibniz Institute for Zoo and Wildlife Research and his co-workers that embryos of white rhinos have been successfully made in vitro represents one of the most exciting breakthroughs in years for rhino conservation. We at BORA, the Borneo Rhino Alliance, are ecstatic at this development, as it represents a new dawn for not just white rhinos, but also for another, even more endangered species – the Sumatran rhino.  While there are only two females of the northern white rhino subspecies left, the white rhino species stands at close to 20,000 individuals. But there are fewer than 100 Sumatran rhinos left in the world. Even this may be an optimistic estimate with some reports claiming only 30 are left in the wild.

Unlike the African and Indian rhino species, Sumatran rhino numbers have drastically plummeted not primarily by poaching. Instead, since the 1930s, the four-part threat was, and still is –

1) Not enough Sumatran rhinos in any one place to form a breeding population
2) Few or no mates in any one location, so very little to no mating
3) Inbreeding due to isolation over several generations
4) Reproductive tract pathology and infertility due to the above three syndromes

As a result, for many decades, there have not been enough Sumatran rhino births to sustain the species, whether or not poaching can be prevented. Natural breeding was seen as the solitary key solution but in the past five years, there has only been one birth in captivity, while there have been three deaths. In the absence of concerted efforts to maximize all available avenues of increasing the number of Sumatran rhino births, the oldest and smallest of all rhino species has been on a one-way fast track to extinction.

There is only one clear way now to save the species – all the last remaining Sumatran rhinos have to be brought into a single managed breeding programme, where two complementary approaches are taken: allowing the fertile ones to breed naturally, and supporting the infertile ones to allow their limited eggs and sperm to create embryos in vitro.

BORA has been desperately working for the past decade to try to breed new generations of Sumatran rhinos. But we faced incredible obstacles in the form of not enough rhinos left in Malaysia and the rhinos’ reproductive tract pathology and infertility. With the help of Professor Hildebrandt (IZW, Germany), Professor Cesare Galli (AVANTEA, Italy) and Professor Arief Boediono (IPB, Indonesia) and their colleagues, we have tried to create a Sumatran rhino embryo in vitro. It was a process that had been derided by many of our counterparts as being fantasy and foolish thinking.

But now with this success for the white rhino, the issue for the Sumatran rhino is no longer about “can in vitro fertilization be done?” but “why are we not prioritizing such work for Sumatran rhinos?”.

Only a few tens of Sumatran rhinos remain alive in Indonesia, and only two, a female and a male in Malaysia. Professor Hildebrandt and his co-workers have been aiming for in vitro production of Sumatran rhino embryos since 2011, when there were three females and the male alive in well-managed facilities in the Malaysian State of Sabah and five managed in the Sumatran Rhino Sanctuary in Indonesia. But the advanced reproductive technology group has never managed to gain interest from some of the most prominent institutions that need to collaborate or provide support to generate a single recovery programme.

The government of Malaysia, Sime Darby Foundation, and numerous interested individual donors from around the world have provided critical financial support for attempts to apply advanced reproductive technology to Sumatran rhinos, but the shocking lack of interest outside Malaysia has stymied the much-needed species recovery programme. The amount of funding going to advanced reproductive technology on Sumatran rhinos simply has been not sufficient enough to allow the scientific process to catch up to the sort of work done on the northern white rhino. The funds from international donors, which currently include a generous donation from government of USA, have gone to camera trapping, surveys, anti-poaching patrols and meetings in Indonesia and USA. This approach fails to recognize that the greatest threat doesn’t come from outside the Sumatran rhino population. It comes from within. Too few Sumatran rhinos, that are scattered and not breeding. All these efforts are akin to putting a band aid over a tumor. 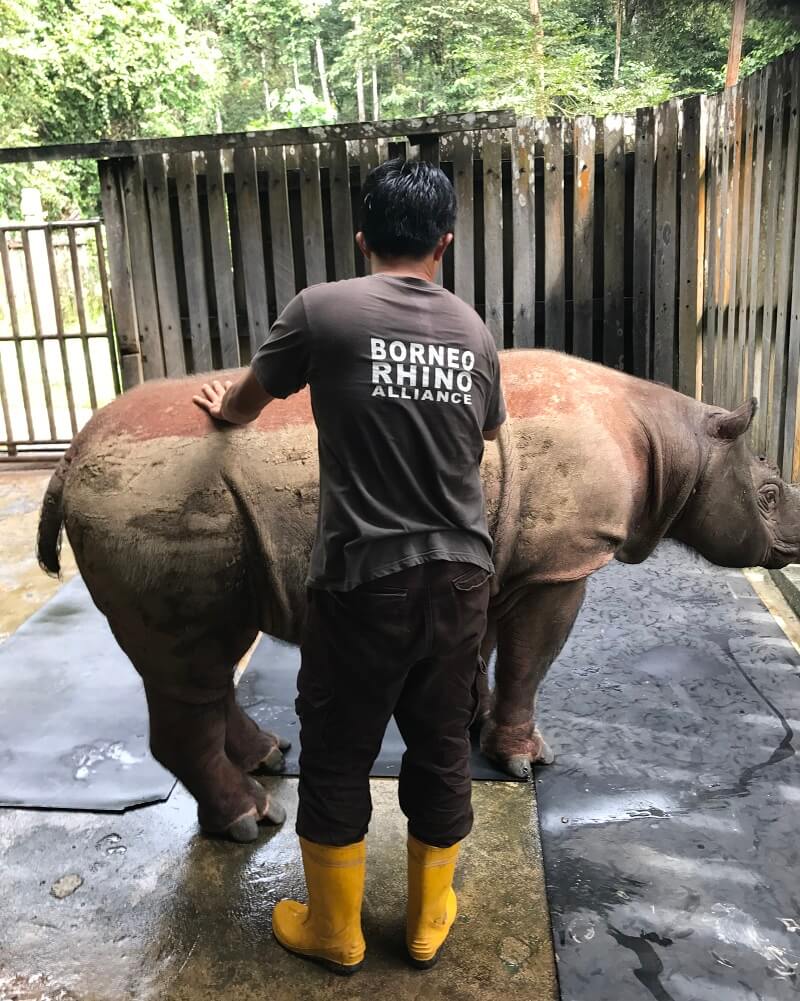 For years, we’ve been trying to engage and work with prominent institutions that are able to influence or lead the charge to save the Sumatran rhino but we’ve been forced to refrain from taking them to task.

But today, we make our stand. The science of advanced reproductive technology is now beginning to deliver, and all of us must embrace it as we do everything in our power to save the most endangered of rhino species by increasing the number of births. We call on the Government of Indonesia, the International Rhino Foundation and the International Union for Conservation of Nature, to recognize the incredible and critical opportunity we have in front of us. Create a programme that prioritises Sumatran rhino births, through both natural breeding of fertile rhinos and in vitro fertilization for those that need such help. The alternative is to choose certain extinction.