You are here: Home / Archives for Resources 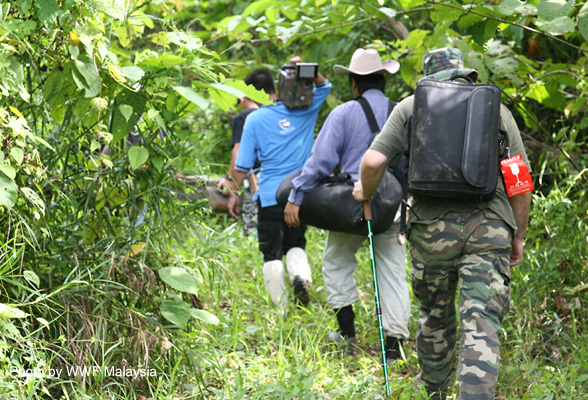 PETALING JAYA, Malaysia, March 20, 2006 (ENS) – Poaching has reduced Malaysia’s population of Sumatran rhinos to just a small group plus a few individuals clinging to survival in the state of Sabah on the island of Borneo, according to an extensive field study conducted in 2005.

Teams from nine government agencies, nongovernmental organizations and academic institutions were able to find just 13 animals in the state of Sabah.

A few individuals still survive in other parts of Sabah that were not covered by the study, the researchers said. Rhinos on the Indonesian side of Borneo and in the Malaysian state of Sarawak are believed to be extinct.

Today, Sumatran rhinos are found only in widely scattered areas across Borneo, peninsular Malaysia, and the Indonesian island of Sumatra.

Rhino horn carries a high price on the black market, where it is sold for use in traditional Asian medicines.

Previous estimates of rhino numbers had suggested there were 30 to 70 rhinos on the island of Borneo, all in Sabah.

“Poaching has decimated Borneo’s once-healthy rhino population, but we were heartened to find that a few individuals have managed to cling to survival,” said Raymond Alfred, of WWF-Malaysia. “Conservationists and Sabah government agencies are working hard to ensure this small population is protected and can grow.”

To conserve the few animals that remain in Sabah, WWF and Malaysian authorities have launched rhino protection units to patrol the area where the 13 rhinos were found.

Because poaching is such a threat to this species, the survey results were not released until strong protection measures could be put in place in the areas where the rhinos are found. Those security measures were recently installed.

In February, WWF-Malaysia and partners launched a five year project called Rhino Rescue, which will organize rhino protection units and other activities to deter poaching.

Partners with WWF-Malaysia in this effort to protect Borneo’s remaining rhinos are the Sabah Wildlife Department, the Sabah Foundation, S.O.S Rhino and the U.S. Fish and Wildlife Service.

Untouched forest the state of Sabah in Malaysian Borneo (Photo courtesy University Malaysia Sabah) “The results from the survey of Borneo’s rhinos are crucial additions to our scientific understanding of the species,” said Dr. Christy Williams, of WWF’s Asian rhino program. “We believe this population may be viable and could recover if their habitat is protected and the threat of poaching is eliminated.”

WWF aims to assist Borneo’s three nations – Brunei, Indonesia and Malaysia – to conserve the Heart of Borneo – a total of 220,000 square kilometers of equatorial rainforest – through a network of protected areas and sustainably managed forest, and through international co-operation led by the Bornean governments and supported by a global effort.

Sabah and the forests of the Heart of Borneo still hold vast stretches of continuous natural forests, which are some of the most biologically diverse habitats on Earth, with high numbers of unique animal and plant species.

This is one of the world’s only two places where orangutans, elephants and rhinos still co-exist and where forests are still large enough to maintain viable populations. The other place is Indonesia’s Sumatra island.

The species of rhino in Borneo, commonly called the Sumatran rhinoceros, Dicerorhinus sumatrensis, is considered to be a separate subspecies, D.s. harrissoni, from the other Sumatran rhinos.

The rhinos feed on the leaves of a wide variety of seedlings and young trees. Unlike other rhino species and other large herbivorous mammals in Borneo such as elephant, wild cattle, and deer, the Sumatran rhino is a strict forest dweller that ventures out of forest cover only inunusual situations.