You are here: Home / The Bornean rhino / Rhino facts 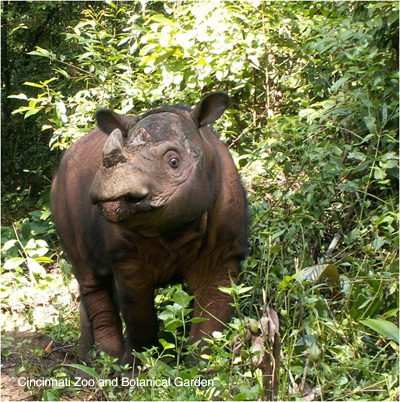 General Rhino Facts about thinos from the Asian Rhino Project

All rhinoceros are herbivores – that is, they eat only plant material. Some primarily eat grass (grazers), some eat mostly leaves and branches (browsers) while others feed on a mixture of both.

Rhinoceros belong to the perissodactyl family of ‘ungulates’ (hoofed animals) indicating that they are large-hoofed animals with odd numbers of ‘toes’ (the rhinoceros has three per foot).

The closest relative to the rhinoceros is the horse, ass and tapir.

Rhinoceros have very poor eyesight, relying instead on acute senses of smell and hearing.

In general, rhinoceros live for about 30-40 years in the wild and up to 50 years in captivity.

Rhinoceros give birth to a single calf after a gestation of between 15 and 16 months. The interval between calves is generally two to three years. Rhinos become sexually mature anywhere between five and seven years. 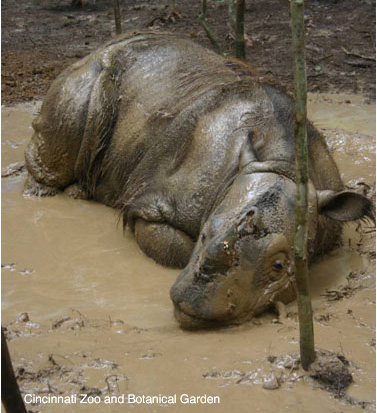 Wallowing in mud is a favourite pastime of all five rhinoceros species. It is a great way for them to cool down in the heat of the day and it also protects their skin from the sun and from biting insects.

Rhinoceros are very agile animals. They may look slow and cumbersome – but don’t be fooled!! Rhinos can run at speeds of 40-50km/hr and can do a 180 degree spin in a single jump.