You are here: Home / The Bornean rhino / The Littlest Rhino 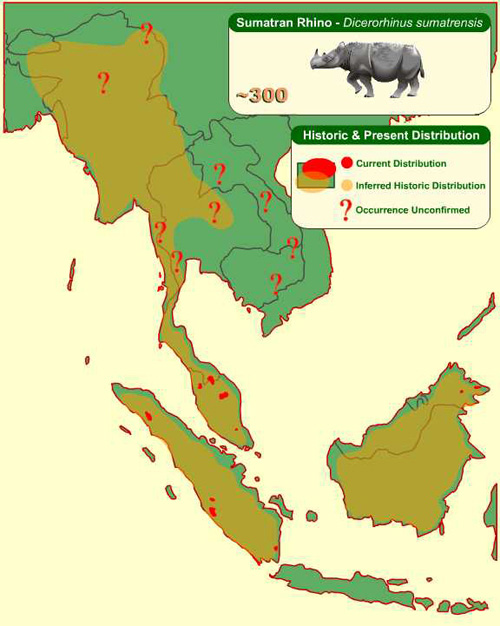 Together with the Javan Rhino, the Sumatran Rhino (Dicerorhinus sumatrensis) is the most critically endangered of the rhino species. This rhino species may represent the rainforest relic of a rhino which was once adapted to the open woodlands of the Pleistocene ice ages when sea levels were much lower than now, and Borneo and Sumatra were joined to mainland Asia via savannahs now under the South China Sea.

Over the past millennium, hunting and habitat loss have driven this rhino to the brink of extinction. Now, there may be just too few fertile females and males in any one forest area to sustain breeding.

Scientists now estimate that there are only about 200 animals remaining in the wild, clinging to existence in highly fragmented populations. As the persistence of populations in Peninsular Malaysia is very much in doubt, Indonesia and Sabah hold the only significant breeding populations. Between 30 – 40 rhinos are thought to be found in Sabah’s Tabin Wildlife Reserve, Danum Valley Conservation Area, and pockets of eastern and central Sabah.

Sumatran rhinos can be expected to persist and breed only in protected areas where they are physically guarded from harm by Rhino Protection Units. The continuation of this protection provides a necessary but perhaps insufficient means for the species’ survival. Active programmes to bring fertile females and males together may now be a necessary supplement to pull the species back from the brink of extinction.

The Sumatran Rhino found in Sabah, is somewhat smaller than that found in Sumatra. It ranges from 4 to 5 feet in height, and 6.5 to 9.5 feet in length. Of course little is relative when discussing rhinos! Sumatran rhinos still weigh in at between 500 and 800 kilos. The Borneo form has been classified as a sub-species belonging to the same species as the rhinos found in Sumatra. This is based on skull shape, DNA and a slight difference in size – the Sumatran rhinoceros is now known as Dicerorhinus sumatrensis sumatrensis while the Bornean rhinoceros is more correctly referred to as Dicerorhinus sumatrensis harrissoni.

The Sumatran Rhino is also known as the Asian Two-horned rhino because of its two horns – a larger anterior horn and a smaller horn behind it. However, the main feature that distinguishes it from the other four rhino species is its covering of hair and reddish-brown skin. This is why the Sumatran rhino is sometimes called the ‘hairy rhino’.

Sumatran rhinos are browsers and consume a wide variety of plant species in the tropical forest. They have a lifespan of between 25 and 35 years. Mothers give birth to one calf every 3 years and the gestation period for a Sumatran rhino is 15-16 months. Females reach sexual maturity between 6 and 7 years of age, while males mature at approximately 8 years of age. Sumatran rhinos are generally solitary in nature and generally form temporary associations for mating before parting ways once again.

Based on information provided by the International Rhino Foundation.