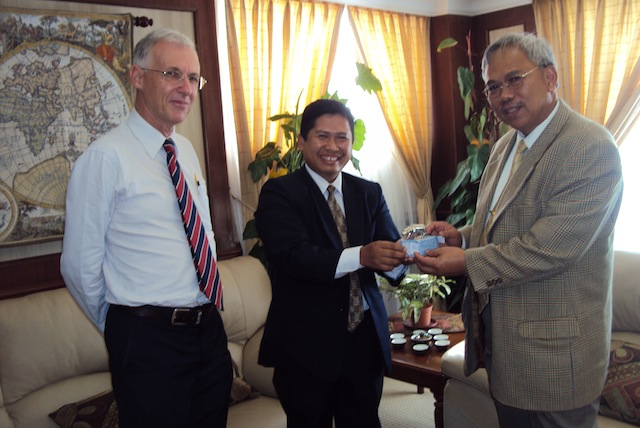 Universiti Malaysia Sabah (UMS) will continue to support efforts to prevent the extinction of Malaysia’s most endangered species, the Sumatran rhino. This was the message from Y.Bhg. Brig. Gen Prof Datuk Seri Panglima Dr Kamaruzaman Hj Ampon, Vice-Chancellor of UMS, stressed to the Board of Directors of Borneo Rhino Alliance (BORA), during a courtesy call by BORA to the Vice-Chancellor on 7th June, 2010. “The administrative HQ of BORA is located within UMS. In addition to that, UMS would be happy to host post-graduate students who may wish to conduct research on the Sumatran rhino in Sabah,” said Professor Kamaruzaman. Formerly known as SOS Rhino Borneo, BORA is a Sabah-based non-governmental organization, established as a non-profit company, dedicated to working to save Sabah’s – as well as Malaysia’s and Borneo’s – most endangered wild animal species, the rhinoceros.

BORA informed Professor Kamaruzaman that the Sumatran rhino is now so rare that the species probably has a chance to survive only in Sumatra and Sabah. “Focusing on one species, that may well go extinct without a programme to reduce death rate and increase birth rate, has the advantage of ensuring that we target our efforts and avoiding distractions,” said Associate Professor Dr Abdul Hamid Ahmad, director of the Institute for Tropical Biology and Conservation (ITBC) at UMS and Chairman of BORA. “But the rhino is down to such low numbers, no-one can be sure that the species will survive in Malaysia. Working with Sabah Wildlife Department and other key institutions, we will give it our best shot. Whatever happens, twenty or thirty years from now, we can all look back assured that we did whatever we could to save a species from extinction.” Dr Junaidi Payne, Executive Director of BORA, as well as consultant to WWF-Malaysia, expressed thanks to Professor Kamaruzaman and Dr. Abdul Hamid for providing office space for BORA in ITBC. “The individuals and institutions concerned with the rhino in Sabah now have to collaborate with one vision, if there is to be any hope of saving this species.” Cynthia Ong, founder of the NGO LEAP, and also a director of BORA, echoed this sentiment.