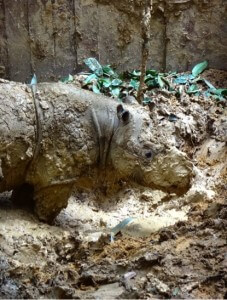 LAHAD DATU, SABAH 14 MAY 2014 – The critically endangered Sumatran rhinoceros is still fighting for survival and in the twilight of its existence. However, all is not lost yet, thanks to the ongoing efforts by passionate and dedicated scientists, veterinarians, conservationists and funders alike. Despite the recent unfortunate findings of massive tumours in the reproductive system of the female rhino named Iman, hopes remain high. These groups of concerned individuals have yet to exhaust all options and have recently embarked on the use of advanced reproductive technology in a desperate bid to save this iconic species.

Based on recommendations by reproductive experts from the Leibniz Institute for Zoo and Wildlife Research (IZW) in Berlin, Germany, Iman who suffered heavy bleeding due to the tumours was put on a treatment that promotes blood clotting. Iman produces eggs but, due to the pathology, she cannot become pregnant. In the next two months, attempts will be made by the world’s foremost specialists from Italy and Germany in collaboration with local experts, to produce a Sumatran rhino embryo in the laboratory, using oocytes from Iman and sperm from the sole Borneo Rhinoceros Sanctuary (BRS) male, named Tam.

Speaking during a media visit to the BRS at the Tabin Wildlife Reserve today, Yatela Zainal Abdin, CEO of Yayasan Sime Darby (YSD), the main funder of the BRS programme, said, “YSD has committed so much resources to save the species, and although the scenario looks bleak, we will support all efforts to save them.

“We have no other alternative now as it is evident that we cannot just rely on the natural breeding process and we have to look at scientific approaches. The development of advanced reproductive technology is one of the options which may be able to boost rhino births and bring about a positive turn to the three-decade struggle to save the Sumatran rhinoceros,” she added.

YSD has been supporting the BRS programme since 2009, committing a substantial RM11.4 million to fund the sanctuary’s operations, and working closely with the Borneo Rhino Alliance (BORA) and Sabah Wildlife Department (SWD). The six-year commitment is until 2015. Meanwhile, SWD Director, Datuk Dr. Laurentius Ambu, said, “Advanced reproductive technology is clearly a bold approach and SWD strongly supports the cooperation between various parties working hard to ensure every avenue is explored to save this near extinct species.”

BORA’s Executive Director, Datuk Dr. John Payne stated, “Many decades of very low population size now represent a critical threat to the survival of the Sumatran rhinos. In particular, females develop severe reproductive tract pathology if they do not breed once they are sexually mature. ”

“Although treatment for Iman’s health is priority, it is key to continue to look for ways to advance the breeding possibilities and biotechnology may be the only salvation to save this 20 million year old species from being wiped off the earth,” he added.

BORA and SWD are now focusing on assisted natural breeding between Puntung, a previously captured female rhino and Tam, who was brought to Tabin in August 2008. Puntung, captured in 2011, suffers from an intractable uterus filled with cysts, likely due to a failed pregnancy in the past. This year, Iman, Puntung and Tam will become donors for in-vitro fertilisation attempts, including a technique called intracellular sperm injection whereby, due to low sperm counts, attempts are made to select and inject individual sperm into the egg. The likes of attempts such as this have hardly been tried so far in the name of conservation of critically endangered species. If these attempts succeed, the next big question will be where to find a healthy mother rhino to nurture the resulting embryo.

The current situation has led wildlife conservationists in Sabah to be able to convince decision-makers that the remaining isolated rhinos in Sabah are too sparsely located to breed on their own in the wild. Therefore, the only way to maintain the population, is to rescue as many rhinos as possible and put them through the assisted-reproductive technology.

All parties agree that giving up is not an option. “SWD is going to work very closely with BORA and WWF to continue the survey in Danum Valley for additional rhinos, and with Leibniz Institute for Zoo and Wildlife Research Berlin and its specialist associates, to see how far we can advance these exciting new prospects for bringing back a species on the brink of extinction,” Datuk Laurentius explained.

With probably less than 100 Sumatran rhinos left in both Malaysia and Indonesia, channels of communication between both the countries are still being pursued with optimism to work together to bring the rhinos together to mate and perhaps one day, get off the International Union for Conservation of Nature’s (IUCN) critically endangered list. Although the Sumatran rhino population is on the brink of extinction, this can still change with appropriate interventions.

Yayasan Sime Darby, or Sime Darby Foundation, was established in 1982 and is the primary driver of Sime Darby Berhad’s Corporate Social Responsibility initiatives. The objectives of Yayasan Sime Darby are supported by its five pillars, namely: education; environment, community and health; youth and sports and arts and culture. While led by independent members of a Governing Council and managed by a dedicated team, Yayasan Sime Darby works closely with the Sime Darby Group, in areas of mutual interest.

Since its inception, Yayasan Sime Darby has awarded scholarships worth RM202 million to 2,271 students both in and outside Malaysia. It is supporting long term research projects of significant scientific value like the Stability of Altered Forest Ecosystems (SAFE) project which is the world’s largest ecological project, a joint effort with the Royal Society (The UK and Commonwealth Academy of Science). Yayasan Sime Darby is also actively involved in the development and improvements of sports in Malaysia namely track cycling, lawn bowling, cricket, tennis and golf. Under its community and health pillar, Yayasan Sime Darby supports initiatives to promote the well-being of disadvantaged people irrespective of race, culture, religion, creed or gender and works with established organisations to promote the development of arts and culture.