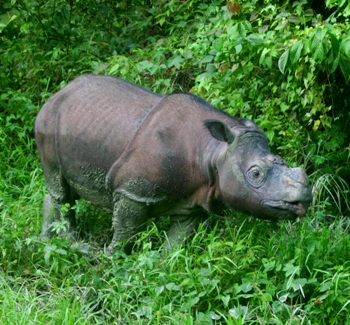 The Sumatran Rhinoceros, recognised as being on the brink of extinction, was found wandering at an oil palm plantation neighbouring the forest on the East Coast of Sabah on the 5th of August.

“It was obvious that the rhino was injured to some degree as it left its forest which had difficult terrain to come out on the flat terrain of the oil palm plantation,” explained Dr. Senthilvel Nathan, Chief Field Veterinarian of the Sabah Wildlife Department (SWD).

Senthilvel led the rescue operation to translocate the rhino safely out of the palm oil plantation and settle it in the rhino paddock at the Tabin Wildlife Reserve (TWR) located east of Lahad Datu.

“It was a delicate operation as we had to make sure that the rhino was not stressed by having human’s so close to it. When we first got there, the rhino showed signs of aggression and made mock chargers at us but we kept our distance and left leaves and fruits for it to eat as the oil palm environment is not suitable for wildlife,” explained Senthilvel. 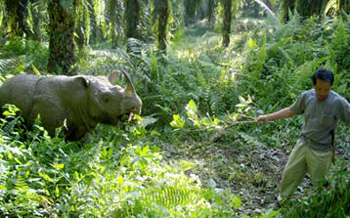 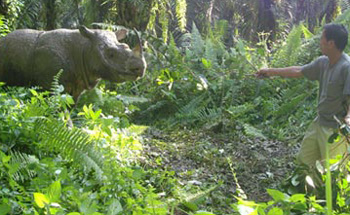 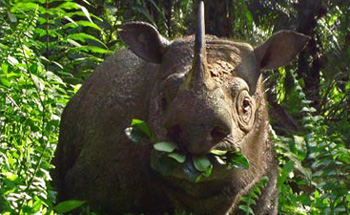 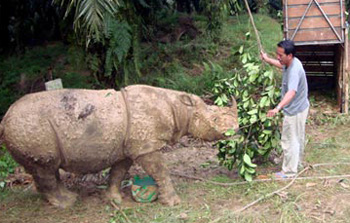 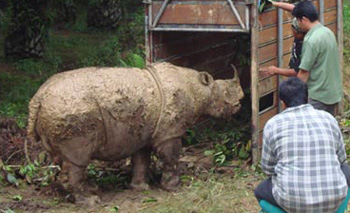 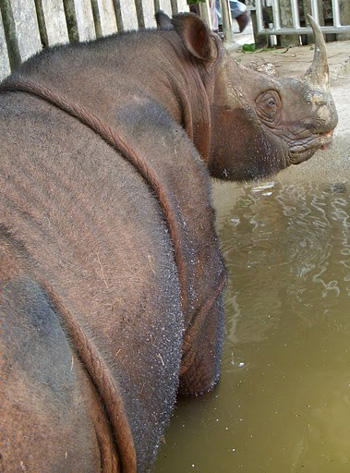 For 10 days, a team of SWD Ranger’s and veterinarians stayed close to rhino at the plantation to habituate their presence to it before getting close enough to check on its condition and to prepare it for its translocation.

“We had to make sure it was getting enough water and food and was healthy because moving wildlife can be very stressful for them,” said Senthivel.

WWF-Malaysia believes that the rescued rhino is also the same rhino that was captured on their camera and video trap in February of 2007 as part of their rhino tracking efforts in the same area.

Working together, the group of 24 undertook the task to monitor the rhino for 24 hours a day and the delicate operation to move the rhino from the plantation to its new home.

“The morning we moved the rhino, myself and Veterinarian Dr. Roza Sipagkui made an assessment to see if he was healthy enough for the four hour journey by road and barge to Tabin,” said Senthivel.

Remarkably their was no need to sedate the rhino as he was easily coaxed into the crate with fresh leaves and fruit.

“After a few attempts to coax the rhino into the crate, it finally walked in effortlessly and without the need for any type of sedation,” according to Senthivel.

Roza rode in the back of the truck with the rhino in the crate for the journey monitoring the rhino closely for any signs of stress and aggression.

“We had sedatives on standby the entire time but as the rhino remained remarkably calm we did not use it all which was also good for the rhino,” explained Senthivel.

According to SWD Director, the rhino has been translocated to the Tabin Wildlife Reserve as it has been designated as the new Bornean Sumatran Rhino Sanctuary.

“The rescue of this adult male rhino in his prime is timely as the Department is addressing the rhino population issue by launching a semi-captive rhino breeding programme based in Tabin,” shared SWD Director, Laurentius Ambu.

The decision to carry out a rhino breeding programme in semi-captivity was made by the State Rhino Task Force (SRTF) which was formed following the Fourth Sumatran Rhino Conservation Workshop held in July last year.

“At that Workshop, Datuk Masidi Manjun made a firm commitment of the State Government to address the issue of the rapidly dwindling number of rhino and this Task Force was established due to his commitment in saving the rhinos,” said Laurentius.

Datuk Masidi Manjun, the Minister of Tourism, Culture and Environment had stated that, every possible action gear toward the preservation of the rhinoceros and propagation of their population had to be taken.

To ensure the survival of the species, Masidi said people need to be educated to look at the rhinoceros as a national treasure.

“It is an uphill battle. But I hope everyone including scientists and NGOs will come together and work for the conservation of the rhinos which we all should consider our natural heritage,” said Masidi, adding that that the cooperation of plantation owners and the hunters was also imperative.

“The fact that the rhino was not harmed and that the Department was informed immediately tells us two things. First, that people are aware that the rhino is a totally protected species and that if anyone had harmed him, it would be a mandatory jail time for them and secondly they recognise how it is a really unique and special animal that needs to be saved,” said Laurentius.

“We must do everything we possible can to save the remaining population from the brink of extinction. The Rhino Task Force is working in collaboration with worldwide rhino experts to carry out this semi-captive breeding programme,” explained Laurentius who’s Department chairs the Task Force with member being from the Sabah Forestry Department and NGOs, SOS Rhino Borneo and WWF-Malaysia.

The State Government is currently working to raise the estimated RM20 million needed to set-up the fully fenced and protected area which could be up to 1000 hectares in size.

“It is a huge undertaking financially, but we must do this because this is most likely our last chance to save this Sumatran Rhino sub-species which is only found here from going extinct,” said Laurentius.

It is estimated that only 30 individuals of this Sumatran Rhino sub-species remain in the wildlife in Sabah.