Tabin Wildlife Reserve: The successful capture of a female Sumatran rhino named Iman from a remote part of Danum Valley, and her transfer to Tabin Wildlife Reserve on 21 March, has revealed once and for all that her species is on the very edge of extinction in Malaysia. Excitement mounted amongst the people involved in the operation when indications of pregnancy were observed after her capture. The signs included feisty behavior, a torn ear, probably a result of a past tussle with a male, a mass with blood vessels inside the uterus, and minor bleeding from the private parts. A detailed ultrasound examination under anesthesia of Iman by specialists from the Leibniz Institute for Zoo and Wildlife Research Berlin (IZW) with local counterparts revealed today (3 April), however, that what had been suspected to be a fetus is in fact a collection of tumors in the uterus.

“With the serious blow to the Global Sumatran Rhino Breeding program with the death of Suci in Cincinnati Zoo, this new revelation of Iman’s very poor reproductive capability due to her uterine tumors is very sad news to all of us,“ said Datuk Seri Panglima Masidi Manjun, Minister of Tourism, Culture and Environment.

“But we shall not give up! As we are working with one of the world’s best large mammal reproductive specialist from Germany (IZW), with their assistance and technological know-how, we will make the best out of this worst case scenario,” added Masidi.

Meanwhile Tun Musa Hitam, Chairman of Yayasan Sime Darby, the main funder of the Borneo Rhino Sanctuary Programme (BRS), was devastated to hear the news but remained hopeful, “Our hearts are saddened by the turn of events with Iman but all hopes are not lost yet. We now have to act quickly and boldly to ensure the survival of this critically endangered species.”

“It is very clear how we need to proceed. We have to embark on a biotechnology approach to save this species, with a focus on techniques such as in vitro fertilization,” said Datuk Dr Laurentius Ambu, Director of Sabah Wildlife Department, “And with the death of Suci in Cincinnati Zoo, where we were planning to send Tam to breed with her, we now have to focus all our efforts on Inam and hope she can successfully breed with Tam,” added Ambu.

“What we found out today was a dramatic emotional rollercoaster. We came here with hope that based on initial ultrasound images there was a probability that Iman was pregnant but when we did a more thorough examination we learnt that there is no fetus in her uterus but big big tumors, some as big as footballs. This means that she has not been sexually active for a long time probably without a male partner for maybe 5 to 10 years,” said IZW reproductive specialist Dr Thomas Hildebrand. 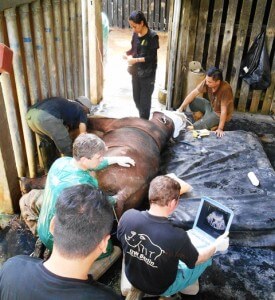 “I think the whole procedure that we did to confirm Iman’s reproductive status shows actually how competent the team of experts comprising of both Malaysian and German specialists. So if we do have a healthy breeding female we could easily have a successful breeding program. Thus we would like to advise Sabah to go with all the force it has to rescue the remaining rhinos in the wild as this is probably the only hope with them to breed through assisted breeding techniques,” added Tom.

“We have known since the 1990s that female Sumatran rhinos are very susceptible to growth of cysts and tumors in the reproductive tract, a syndrome associated with long periods without breeding,” said Dr Zainal Zahari Zainuddin, Borneo Rhino Alliance (BORA) veterinarian based in Tabin Wildlife Reserve, “If we want to save the species, we need to bring rhinos into managed conditions and try out advanced reproductive technologies.”

Datuk Dr Junaidi Payne, BORA executive director, stated that “Everyone concerned with preventing the extinction of this magnificent species really ought to work collaboratively to share knowledge, ideas, experience, gametes and rhinos. That includes Indonesia and Malaysia, and the various specialists, notably IZW”.

“This is grim news as this seems to confirm our thoughts that rhinos might not be breeding anymore in the wild,” said Dr Sen Nathan, Assistant Director at the Sabah Wildlife Department. “The reproductive tract pathology in Iman seems very similar to the lesions found not only in Puntung, the other female Sumatran rhino rescued in 2011, but also in the poached female rhino in Kalabakan in 2001. The poached female rhino was a very young healthy female but her whole reproductive tract was unviable and full of large tumors as well,” added Sen.

“By the looks of this we might be seeing the last generation of Sumatran rhinos in the wild. Once these few grow old and die… that’s it, there would be no more rhinos in Sabah,” sadly concluded Sen.