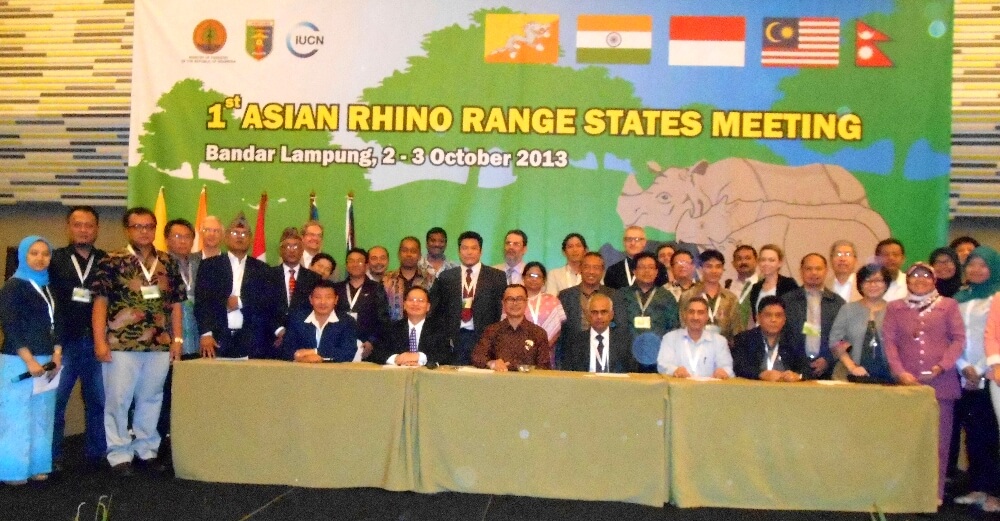 At a meeting of the five Asian Rhino range states – Bhutan, India, Indonesia, Malaysia and Nepal – a common action plan was agreed today with the aim of increasing the populations of Asian Rhino species by at least 3% annually by 2020.

This agreement, called the Bandar Lampung Declaration, was reached after two days of negotiations at the Asian Rhino Range States Meeting held in Bandar Lampung, Indonesia, hosted by the government of Indonesia and facilitated by the IUCN Species Survival Commission (SSC).

“Our decision to host this meeting reflects Indonesia’s determination to do everything we can to save our species of rhino,” says Zulkifli Hasan, Minister of Forestry, Indonesia. “We have found that when a species becomes extremely rare, occurring at a very low density, such as the Sumatran Rhino, we need to take special measures to ensure that the animals can find each other and breed.”

The commitment outlines specific conservation actions that are necessary to secure a steady growth rate of all three Asian Rhino species – Sumatran, Javan and Greater One-horned. These include improving the biological management and monitoring of the species, strengthening the protection of their habitats, performing strict anti-poaching operations, introducing tougher penalties for those that illegally kill Asian Rhinos, and maintaining the ban in the international trade of all rhino products.

“The number of surviving Asian Rhinos, especially of Javan and Sumatran Rhinos, is currently so low that maintaining their populations is not enough to Greater One-horn rhinoceros at the Chitwan National Park, Nepal. Photo: Andrew Gellsecure their survival,” says Simon Stuart, Chair of IUCN SSC. “What we need to see is the recovery of these species and a steady increase of their populations. Seeing all Asian Rhino range states agree on a common and very specific action plan is a major step towards achieving this goal.”

Pressure from illegal hunting on all species of rhinos has grown seriously in recent years, mainly due to a significant increase in non-traditional use of rhino horn and a rise of rhino horn trade in Asian markets, especially in Vietnam and China.

The Sumatran Rhino (Dicerorhinus sumatrensis) is listed as Critically Greater One-horned Rhinoceros (Rhinoceros unicornis) in the Manas Wildlife Sanctuary, India. Photo: Remco van MermEndangered on The IUCN Red List of Threatened Species™ and its total population could be fewer than 100 individuals. An estimated 50 individuals of the Javan Rhino (Rhinoceros sondaicus), also listed as Critically Endangered, survive in Java’s Ujung Kulon National Park. The Greater One-horned Rhino (Rhinoceros unicornis), with estimated 3,339 individuals mainly in India and Nepal, is listed as Vulnerable and could easily be lost if current trends in the illicit trade in rhino horn continue.

The agreement was reached based on the latest knowledge on the status and trends of the three species provided by the IUCN SSC Asian Rhino Specialist Group.