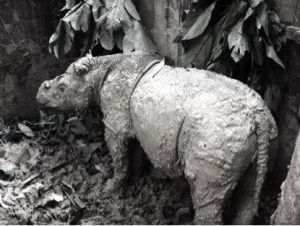 Abstract: The Critically Endangered Sumatran rhinoceros Dicerorhinus sumatrensis formerly ranged across Southeast Asia. Hunting and habitat loss have made it one of the rarest large mammals and the species faces extinction despite decades of conservation efforts. The number of individuals remaining is unknown as a consequence of inadequate methods and lack of funds for the intensive field work required to estimate the population size of this rare and solitary species. However, all information indicates that numbers are low and declining.

A few individuals persist in Borneo, and three tiny populations remain on the Indonesian island of Sumatra and show evidence of breeding. Rhino Protection Units are deployed at all known breeding sites but poaching and a presumed low breeding rate remain major threats. Protected areas have been created for the rhinoceros and other in situ conservation efforts have increased but the species has continued to go locally extinct across its range. Conventional captive breeding has also proven difficult; from a total of 45 Sumatran rhinoceros taken from the wild since 1984 there were no captive births until 2001. Since then only two pairs have been actively bred in captivity, resulting in four births, three by the same pair at the Cincinnati Zoo and one at the Sumatran Rhino Sanctuary in Sumatra, with the sex ratio skewed towards males.

To avoid extinction it will be necessary to implement intensive management zones, manage the metapopulation as a single unit, and develop advanced reproductive techniques as a matter of urgency. Intensive census efforts are ongoing in Bukit Barisan Selatan but elsewhere similar efforts remain at the planning stage.