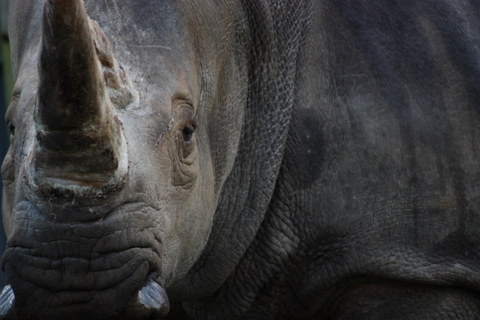 Rhinoceros horns have long been objects of mythological beliefs. Some cultures prize them for their supposed magical or medicinal qualities. Others have used them as dagger handles or good luck charms. But new research at Ohio University removes some of the mystique by explaining how the horn gets its distinctive curve and sharply pointed tip.

Scientists have discovered new details about the structural materials that form the horn and the role those materials play in the development of the horn’s characteristic shape.

The horns of most animals have a bony core covered by a thin sheath of keratin, the same substance as hair and nails. Rhino horns are unique, however, because they are composed entirely of keratin. Scientists had been puzzled by the difference, but the Ohio University study now has revealed an interesting clue: dark patches running through the center of the horns.

The team examined the heads of rhinos that died of natural causes and were donated by The Wilds in Cumberland, Ohio, and the Phoenix Zoo. Researchers conducted CT scans on the horns at O’Bleness Memorial Hospital in Athens and found dense mineral deposits made of calcium and melanin in the middle.

The calcium deposits make the horn core harder and stronger, and the melanin protects the core from breakdown by the sun’s UV rays, the scientists report. The softer outer portion of the horn weakens with sun exposure and is worn into its distinctive shape through horn clashing and by being rubbed on the ground and vegetation. The structure of the rhino horns is similar to a pencil’s tough lead core and weaker wood periphery, which allows the horns to be honed to a sharp point.

The study also ends speculation that the horn was simply a clump of modified hair.

“The horns most closely resemble the structure of horses’ hoofs, turtle beaks and cockatoo bills. This might be related to the strength of these materials, although more research is needed in this area,” said Tobin Hieronymus, a doctoral student in biological sciences and lead author on the study.

The study also found that the melanin and calcium patches appear in yearly growth surges but the effects of temperature, diet and stress on the growth are still unknown. The results of the horn growth study may be of interest to conservation groups whose goal is to strengthen rhino populations and reduce the poaching of horn for the black market.

“Ultimately, we think our findings will help dispel some of the folk wisdom attached to the horn. The more we can learn about the horn, the better we can understand and manage rhino populations in the wild and in captivity,” said Lawrence Witmer, a professor of anatomy in Ohio University’s College of Osteopathic Medicine and director of the project.

The Journal of Morphology published the research findings in its October issue. Witmer and Ryan Ridgely were co-authors of the study, which was funded by the National Science Foundation and conducted with the assistance of O’Bleness Memorial Hospital in Athens, Ohio, and The Wilds, an Ohio animal preserve.