You are here: Home / Archives for pregnant Sumatran rhino 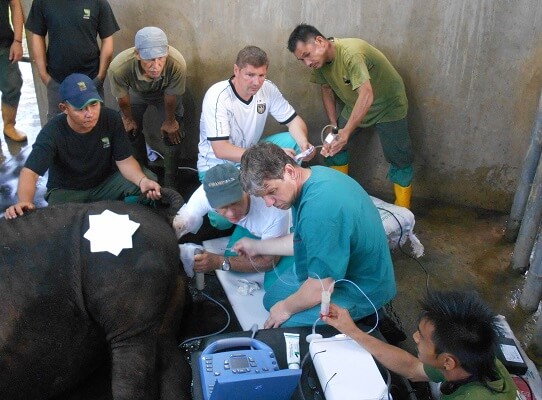 1 Mar 2015, Kota Kinabalu: The Sumatran rhino once browsed the forests in India, Bangladesh, Myanmar, Laos, Thailand, Malaysia, Indonesia, and China. By the mid-20th century, its range and population has drastically shrunk due to forest habitat loss and killing for its horn. The demand for rhino horn stems from the common yet misguided belief that it harbours medicinal properties.

In Malaysia, a disturbing combination of factors has led to its dwindling population and near-extinction: the lack of knowledge on rhino population and reproduction status in the wild, poor husbandry practices in captive centres, the conservation focus being solely on protecting rhinos in the wild which has not been effective, and at the same time not developing an effective captive breeding population as a parallel effort.

Some wildlife researchers estimate that there are less than 100 Sumatran rhinos left in the world and current populations are largely confined to Indonesia, with very few wild rhinos possibly remaining in Sabah. In Peninsular Malaysia, the species is likely to be totally extinct although this terrible event has gone unrecognized. Rhino biologists regard the species as functionally extinct in all of Borneo as the few individuals remaining are insufficient to provide hope of survival of the species.

Over the last thirty years, more Sumatran rhinos have died than have been born, both in the wild and in captivity. Between 1984 and 1995, a total of 22 Sumatran rhinos were captured in Peninsular Malaysia and Sabah for a captive breeding project. Except for one which was already pregnant when captured, none bred while in captivity, and all have since died. It is clear that protecting wild populations has failed, and that natural breeding in captivity results in too few births to be a viable strategy.

What remain of the Malaysian population are a male named Tam and two females named Puntung and Iman. Captured from the wild in Sabah from 2008 to 2014, the trio currently resides in the Borneo Rhino Sanctuary (BRS) in Tabin Wildlife Reserve, under the care of Borneo Rhino Alliance (BORA), a non-governmental organization developed for this purpose under the guidance 0f Sabah Wildlife Department. Unfortunately, both Puntung and Iman have severe reproductive tract pathology, possibly due to having gone un-bred in the wild for a long time. However both are still producing oocytes, which are cells that form eggs which then can be fertilized by sperm. Rather than throwing in the towel and abandoning the species to extinction, Sabah Wildlife Department and BORA with its donor Sime Darby Foundation are collaborating with Leibniz Institute for Zoo and Wildlife Research (IZW) in Germany and professor Cesare Galli and his wife of Avantea laboratories in Italy to produce Sumatran rhino embryos in the laboratory using Advanced Reproductive Techniques (ART).

It appears that ART represents the best chance of growing the captive population of Sumatran rhinos. Compared to classical artificial insemination technique which pumps millions of sperm into the uterus of a rhino, a technique already well-established for domestic animals called intracellular sperm injection maximizes the chance of fertilization of the egg by injecting only one viable sperm into a single oocyte in a laboratory condition. The resulting embryo is then implanted into a female rhino for development of the foetus over a normal pregnancy period.

According to Datuk Dr Junaidi Payne, BORA’s Executive Director, “All remaining Sumatran rhinos should be brought together in two or three closely-managed captive care facilities, where the use of their gametes can be maximised. At BRS, we are racing against time to harvest gametes from the rhinos here for use in in-vitro fertilisation, as well as preserving frozen gametes and stem cell lines within the 2014-2017 window”. He added, “The programme which we are pursuing for this period requires a few millions of ringgit to run, with Sime Darby Foundation being the primary financial supporter, while the specialist veterinary team from IZW with associated colleagues from Avantea laboratories, Stanley Manne Children’s Research Institute and San Diego Frozen Zoo are providing Sabah with the necessary ART expertise,” he added.

“Through ART, each rhino can be maximised to help save its species,” said William Baya, Director of Sabah Wildlife Department. He continued, “With the species on the brink of extinction, SWD is committed to support a global Sumatran rhino captive breeding programme using ART as it is the best chance we have to save this species. We are ready in principle to support Indonesia if requested”.

Dato’ Dr Dionysius Sharma, the CEO and Executive Director of WWF-Malaysia, has this to say to sceptics of the Sumatran rhino’s ART programme:

“WWF-Malaysia believes in using innovative solutions to resurrect the critically endangered Sumatran rhino population. More than a century ago, moving critically endangered African rhinos on to fenced private land, as well as captive breeding of the European bison were necessary and successful elements in saving these species  from extinction and we hope to have the same success for the Sumatran rhino with ART,” he commented.

With time clearly running out, it is paramount that remaining wild rhinos are captured for ART as maximising births in captivity seems to now be the only viable way to save this 20 million-year-old mammal species from extinction.

KOTA KINABALU: Wildlife experts here remain hopeful about the future of the highly endangered Sumatran rhino following a rare picture of a 20-year-old female that is believed to be pregnant. The picture of the female rhino was captured by remote camera trap devices set up jointly by the Sabah Wildlife Department and WWF-Malaysia. The picture was considered rare as there were estimated to be less than 30 rhinos left on the entire island of Borneo.

“There are so few Sumatran rhinos left in the world that each calf represents a lifeline for the species, she said here Tuesday.

Sabah Wildlife Department director Dr Laurentius Ambu said the department was working with WWF-Malaysia and the Borneo Rhino Alliance (BORA) to finalise the Rhino Action Plan that which would be expected to be ready for full implementation by August this year.  The plan would address the conservation plans of the viable population including isolated rhinos, Dr Laurentius added. He said his department intended to take a “different” approach in managing the viable but isolated rhino population in Sabah.

Habitat protection and enforcement have been recognised as the main strategy in order to ensure the survival of the viable rhino population in forest reserves, while a breeding programme has been identified as the key strategy in order to address the conservation plan for the isolated rhinos, Dr Laurentius added.

The rhino breeding programme is currently supported by Sime Darby, the Malaysian federal government and WWF-Malaysia. The future of rhinos in Borneo now depends on how seriously the enforcement and security work in the forest reserves can be implemented and coordinated, said Raymond Alfred, Head of the Borneo Species Programme, WWF-Malaysia. The monitoring and survey work in the central forest of Sabah is currently supported by HONDA Malaysia, WWF-Netherlands, WWF-Germany and USFWS since 2005.

WWF-Malaysia is working with the department and the Sabah Forestry Department to look into reinforcing the security of the forest reserves that are the key habitats for the animals. Alfred noted that that data from an ongoing rhino monitoring and survey programme showed that the animals’ home range was affected by oil palm plantation expansion near the state’s coastal areas. The research also indicated that sustainable logging activities had minimal impact on the rhino population while conversion of forests especially those located adjacent to key rhino habitat into other mono-crop plantations such as oil palm would further worsen the fragmentation of the rhino population.