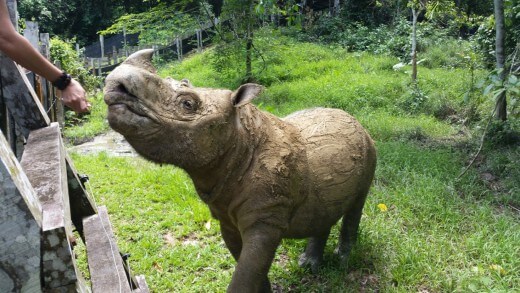 The clock is ticking for the critically endangered Sumatran rhinos. There are only three rhinos left in Malaysia and conservationists are working tirelessly to save these animals from extinction.

In a span of six years, only three of the species have been captured from the jungles of Sabah – a male named Tam (found in 2008) and two females, Puntung (2011) and Iman (2014). The Sumatran rhinos have been relocated to the Borneo Rhino Sanctuary at Tabin Wildlife Reserve (TWR), a 1,225sq km nature preserve in Lahad Datu, Sabah.

It was built in 1984 to preserve the state’s disappearing wild animals. Over there, Sabah-based NGO Borneo Rhino Alliance (Bora) has been taking great pains to ensure the survival of these gentle giants.

With three rhinos found within six years, could there be a glimmer of hope that more rhinos are roaming Sabah’s jungles? Sadly, Bora’s executive director Datuk Dr John Payne says the chances are close to zero.

“Bora and WWF-Malaysia have been searching for these endangered animals at Danum Valley Conservation Area (also in Lahad Datu) and TWR for decades. Sumatran rhinos are distinctive animals, easily found by their footprints or captured on camera traps. If there aren’t any evidence within three months, it is safe to conclude that there aren’t any rhinos present,” explains Payne, 62, during the premiere of National Geographic Channel’s Operation Sumatran Rhino.

The documentary will air on National Geographic Wild (Astro Ch 550) on Sept 19.

Rhinos are solitary animals and there is the problem of breeding due to designated home ranges, says Dr Zainal.

“Female Sumatran rhinos have their own home ranges and male rhinos have theirs, too. Usually, the male’s home range overlaps several home ranges of females. However, if a male dies and there are no other males around, the females go unbred,” explains Dr Zainal, who has been with Bora since 2010.

Online news website usatoday.com in its article, 13 Species We Might Have To Say Goodbye To In 2015, states that the world is losing dozens of species every day in what experts say is the sixth mass extinction in Earth’s history.

The report highlights that as many as 30% to 50% of all species are moving towards extinction by mid-century. It lists the rhino as one of the planet’s most endangered animals alongside the amur leopard, leatherback turtle and Siberian tiger.

The Sumatran rhinos were declared extinct in the wild in Malaysia in 2015. There are fewer than 100 of the species left, which are mostly found in the jungles of Kalimantan and Sumatra. If no efforts are taken, our children may never be able to see these animals, except in a picture book.

Bora’s website (www.borneorhinoalliance.org) states that due to a thousand years of relentless hunting throughout Asia for their horns, Sumatran rhino numbers were severely depressed by the early 20th century. Habitat loss from human population growth and farming further affected the population. But these two problems have combined to create a different threat – a lack of breeding.

Although the simplest tactic to increase the Sumatran rhino’s population would be to reproduce calfs (between existing rhinos in Malaysia and Indonesia), no fertility programme has been conceptualised between both countries, says Payne.

“It does not matter where the rhinos are housed because semen and eggs can be moved between facilities, or rhinos moved on loan from one place to another. For it to work out, all remaining living Sumatran rhinos must be absorbed into the programme,” explains the British rhino expert who has been involved with efforts to prevent the extinction of critically endangered species since the 1970s.

Dr Zainal hopes Indonesia shares the same mindset as the country could face the same problem as Malaysia in years to come.

“The more trials on assisted reproductive technology (ART) and in vitro fertilisation (IVF), the higher the chances of saving a genus from extinction. It would help us greatly as we have only the last three rhinos. The kind of collaboration that we want is a supply of frozen sperm from Indonesia to use for IVF with eggs from our females,” says the 58-year-old vet, adding that there are plans to cryogenically freeze (low-temperature preservation) Sumatran rhino gametes (if an animal dies) and work on cell cultures for future propagation, including cloning.

Payne chips in: “These methods are being done in Malaysia. The issue is the lack of eggs and sperm for practice, that are holding up progress on this. Hopefully we will receive support from the Indonesian Government to pursue the necessary strategy to save the species from extinction.”

Despite the best medical assistance, there is an underlying health problem: female rhinos tend to develop cysts or tumours in the uterus and reproductive tracts, a syndrome associated with long periods without breeding, explains Payne.

“Two years ago, Malaysia attempted its first IVF on two female Sumatran rhinos. So far, only 12 eggs have been harvested but some were of poor quality. There’s also the problem of transporting eggs to specialist IVF laboratories in Europe and Kuala Lumpur,” says Payne, who hopes to obtain several good eggs every month and a lab nearer to Tabin to boost chances of IVF success.

Dr Zainal says another issue is that the rhinos are old, resulting in fewer eggs for IVF trials.

“In Malaysia, we do not have a choice but to use semen from an old male and eggs from two old females. To make matters worse, our females have various reproductive issues,” says Dr Zainal.

Despite the hurdles, these conservationists are not about to give up. In fact, they are even more determined to ensure the survival of the Sumatran rhinos.

“We will keep them (the last three) alive and healthy and productive (for eggs and sperm). We will not give up working on collaborations with Indonesia and the rest of the world. And lastly, we will continue to look for rhinos if at all they exist and hope for the best,” adds Dr Zainal.
Read more at http://www.star2.com/living/animals/2016/09/13/join-sumatran-rhinos-race-extinction/#feqtPgdUyfy48PpD.9